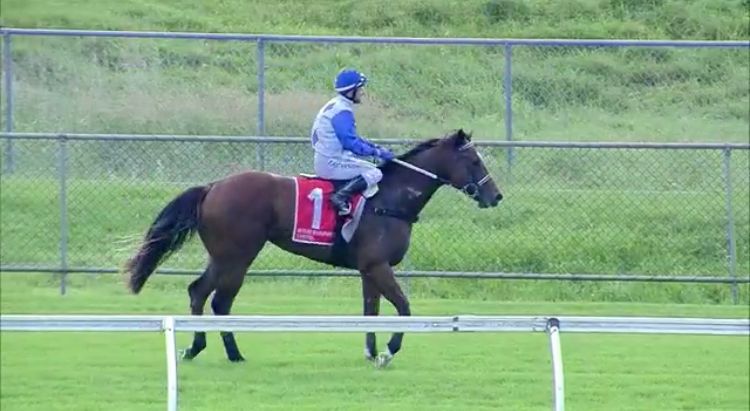 An excellent return to racing by Thunder Mania as he started his autumn/winter campaign at Sunshine Coast today.

At $2.30 in a field of 7, and continuing the stable’s unlucky run of barriers by drawing 7, the 2yo colt flopped out of the barrier some 3 lengths behind his nearest rival, whilst meanwhile the well backed second favourite Rollinwiththeflow went straight to the front.

Without panicking, jockey Larry Cassidy came to the turn last but clearly planning how the sprint to the line was going to unveil, and he saved precious ground before swinging to the outside under his own steam, before charging to the line to win. Grey filly The Silver Lady fought back bravely, but Thunder had her measure, with a couple of slaps with the whip to keep him focussed.

A very soft win from the big colt, who looks like he will eat up every bit of the 1400 and 1600m races that trainers Sheila Laxon and John Symons have him earmarked for.

Obviously the stable was delighted with the return; Thunder was slightly underdone and vulnerable today, and to see him dominate this field augurs well for the rest of the campaign, which hopefully will include the Group 1 JJ Atkins over 1400m on June 6.