A terrific effort by I Ponder yesterday at the Sunshine Coast in taking out the HOT 91 Class 2 Plate over 2000m!

After winning his maiden in strong fashion a fortnight ago, wet weather had provided a significant challenge for all local trainers to keep their horses hard and fit given the lack of access to the grass track. In addition, I Ponder found himself having to jump two grades and an additional 400m in yesterday’s race, so the Esprit stable were wary. Despite that, the gelding was well supported in the market and went to the barriers a firm favourite with many punters expecting him to win.

It did take the entire length of the straight to win, but win he did in a strong staying performance!

After overracing early in the race whilst sitting back 5th on the rails, jockey Luke Tarrant took the opportunity when it presented to switch off the rails and put him into the running line, and on the turn loomed ominously 3 wide.

Down the straight it became quite a grinding slog, and just after it seemed he would not quite get there, his big head lowered and hit the line first. 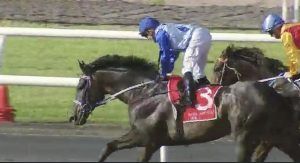 Luke reiterated in his post race interview that he will be much better suited on the grass and further out in distance, and that he still has a lot to learn.

John and Sheila were delighted, fully aware of the limitations they have had in preparing the horse for the race, and look forward to the sunnier skies and firmer grass tracks!

Congratulations to the Esprit Racing team and well done to connections.